What a great winter season for open-mic events in Birmingham.

I had the opportunity to strut my stuff on the open-mic floor with some excellent spoken word artists, in some of the best Spoken Word gigs in South Birmingham, including:

November’s Spoken Trend was “a blinder of an evening”…with superb headline sets from Casey Bailey and Theo Theobald. Feedback was very positive.

“As always, the Open Mic sections were brilliant”

In December, I had a great time sharing new workin this monthly gig @ The Ort in Moseley – warmly hosted by Autumn Aldous (and her wonderful dog). I followed an energetic live band with some performance poems and shared the same stage as established poet Matt Black and local storyteller Sharon Carr. 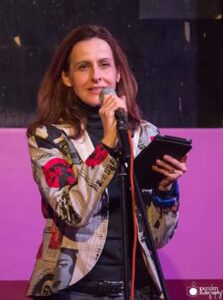 and here I am… no, not squinting – deep in relective musings at December’s Grizzley Pear – presented by University of Birmingham’s Writer’s Bloc @ Bristol Pear in Selly Oak. This month the theme was Reflections and was hosted by Sean Colletti.

I was knocked out by the amazingly high standard of this event, featuring emerging and established poets from the University of Birmingham and open-micers in the region.

Headliner Liz Berry, in particular, was awesome. She is fast making waves in the Midlands for her award-winning use of Black Country language in poetry – “the TS Elliot of our generation” – Sean Colletti