Poems, poems, poems all around…I am currently surrounded by poems I am reading, writing and performing, whether it be at a variety of open-mic gigs in South Birmingham, performing with talented muscians in Journey of Childhood (a show to raise funds for Save the Children) or playing the feature role in a poetry film written by the very talented Sarah James that was launched at the new art and poetry festival ‘Disappear Here’ in Coventry in March 2017. The project has recently been nominated for a Saboteur Awards – BEST COLLABORATIVE WORK – award. 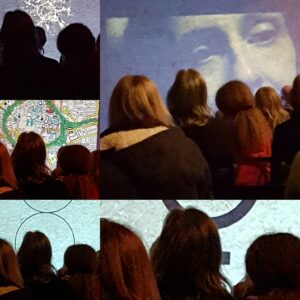 It was surreal to see my face on the big screen.

Experimenting with the craft of writing poetery, I am indebted to my Room 204 (the artist development wing of Writing West Midlands) for their inspiration and encouragement, especially Matt Black. 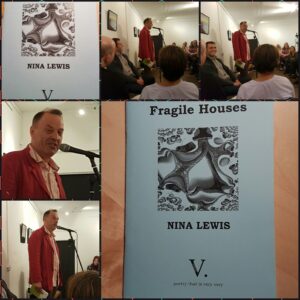 At the end of 2016 I had the chance to share the stage with Matt (see above) and debut my latest poems at P Cafe (now Artefact) as part of their regular open mic event Stirchley Speaks. It was a great evening with some exciting new talent, including Nina Lewis reading from Fragile Houses published by V Press.

New to performing my own poetry, it was a very positive experience and I had some terrific audience feedback for my new poem Spa Head which also attracted some attention at November’s Howl open-mic at The Dark Horse in Moseley. Since that was the chance to share the stage with open-mic headliners Stephen Thomas, Nyandavoh Foday & Raza Hussain it was an exciting evening.

(I loved performing at both events and have already returned to perform a few poems in February 2017.)