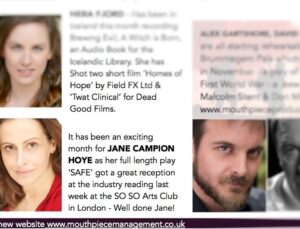 This was a great opportunity to help give an outing to my full-length play SAFE in the elegant James Roose-Evans Room at No 6, Frederick Place – an Arts Hub in the city of London, a stone’s throw from Bank tube station. It is the HQ of, and run by The So & So Arts Club and Frontier Theatre Productions.

The play was showcased to an industry audience. It gave me the chance to work with Sasha McMurray, an emerging director (from the National and Finborough Theatre) and a talented cast of actors – that included Andrew Wincott (Adam in The Archers) and Jilly Bond (National Theatre, Birmingham Rep, BBC) as well as three exciting newcomers Imogen Wilde, Michael Edwards and Lewis Chandler.

A number of seasoned writers in the audience gave me some very valuable feedback about the play’s development – with the offer from a London based production company to take the story of the leading character into a continuing TV drama. Watch this space!

Jane, fab to meet you & great to have it in the building. Just the sort of thing we want… I found the play very compelling. The actors were terrific. Sasha did a great job. Very disturbing, challenging material… Well done!